Welcome to the 65th edition of Tuesdays With Mitch, where the sports world is providing a wealth of material, meaning I didn’t have to write too much this week. But I still have a big post for you. Let’s get into it…

I’ll start with a few words on the Rockies, who lost 15 of 18 games before winning five in a row, including an incredibly unlikely sweep of the Giants in San Francisco via three consecutive late inning comebacks. (They lost to the Dodgers last night.) So here are those aforementioned words on the Rockies:

I have no idea what to think about the Rockies.

But hey, this was an exciting moment:

On to the weekly departments…

In a week with a ton of options for this category (Kawhi Leonard, Tim Duncan, Greg Popovich, Alec Martinez, Yoenis Cespedes, Martin Kaymer, That Soccer Guy and the late Tony Gwynn) some random dude in San Fransisco gets the honors. We’ll get to those other studs in a bit.

Giants fans are generally huge douche bags, but this guy made perhaps the most impressive home run catch ever yesterday. Coming out of the tunnel, in stride, bare hand, and he played it cool like it was no big deal. But the coolest part? He did all that while holding a small child in his non-catching hand ON FATHER’S DAY.

That doesn’t even look real.

Picture(s) of the Week

Great shot of Tim Duncan as his mind-bogglingly incredible career keeps rolling along. And here’s one of Duncan and his son on Father’s Day, from the postgame presser: 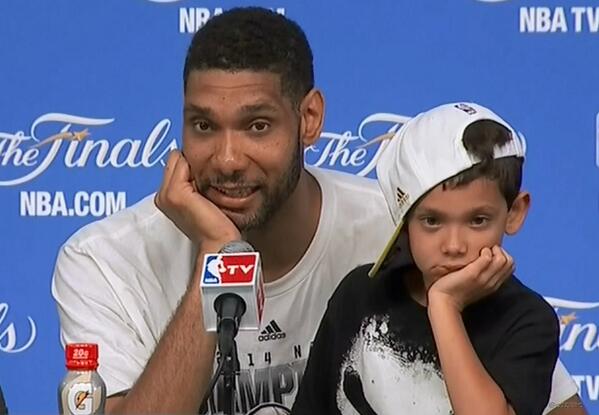 Vine of the week:

Yoenis Cespedes made the best throw of the year against the Angels this week. MLB made a pretty sweet Vine of the occasion.

Just look at that throw. That’s absolutely one of the best plays of the year in 2014. Look how casual the catcher is! Then he did it again the next night.

Ok Cespedes. We get it. You have an arm. #Angels

Remember when O.J. Simpson killed those people? That was pretty douchey, huh? That chase took place 20 years ago today.

I don’t like to put nine minute videos in here, but I couldn’t stop watching that. What a fascinatingly strange moment in American history. And I’m proud to say I DO NOT REMEMBER where I was when this went down. Maybe all those old people who tell me I’m not that old are right!

A couple links worth sharing:

I’m sure you’ve heard the very, very sad news of Tony Gwynn’s passing. A lot of digital ink was rightfully devoted to Gwynn yesterday. It’s impossible to read all the different pieces but here a few that are worth your time:

Jeff Passan took a look at the two new videos that MLB released of their new advanced media tracking system. They are amazing. Yasiel Puig can run 21 mph on grass while tracking a baseball with a glove on his hand. Andrew McCutchen takes a nearly perfect route (99.7 percent efficient) to a line drive in the gap. These guys are absolute freaks. Anyway, this stuff is awesome and is about to further change the way we consume baseball. Highly recommended read here.

I’m always quite interested in the 50 athletes who made the most money last year.

And a bunch of other fun stuff from the week:

Great call (or lack thereof) from the great Doc Emerick as well.

Zach Johnson made a hole-in-one during an otherwise boring-as-hell US Open. Then he did this, which is pretty cool. I guess.

Remember the Jim Harbaugh Wal Mart pants story from a few months back? Dockers has some smart marketing people and Harbaugh has a funny wife:

I feel like we haven’t had anyone falling on their face in a while ’round these parts, which is a shame.

The GIF is even better.

Let’s double up on the “people falling down” category!

That stuff will never get old.

This young man was a bit startled

I wish Jimmy Kimmel would do one of these every week:

And finally, here’s a ball bouncing off of a guy’s head into a large net.

Apparently a lot of American folks cared about that ball going in that net. I have to admit, this video is pretty awesome.