Welcome to the 104th edition of Tuesdays With Mitch, where the dreary winter is officially behind us. Let’s get into it…

As always, the health of Carlos Gonzalez and Troy Tulowitzki will be key to any success the Rockies hope to have. (Roy Chenoy / USA Today Sports)

“People ask me what I do in winter when there’s no baseball. I‘ll tell you what I do. I stare out the window and wait for spring.”  -Rogers Hornsby

It’s spring. Baseball is back. And as the 2015 Major League Baseball season begins, it’s officially time to turn the page and focus on the past time of America. Despite what you may have heard, baseball is still wildly popular in this country. Revenues are through the roof, attendance is healthy, and the game is going strong.

To kick off this joyous occasion, I’m providing you with everything you can expect from the Rockies this year, from their record, to the broadcasts, to the inevitable injuries, to CarGo’s WAR. Some of these are educated guesses, some are based off of historical tendencies, and some come simply from a gut feeling or hunch. And yes, I realize I’m a day late with this post, but that’s what happens when things take place on Mondays. (Also, I’m pretty much stealing this format from this Will Leitch column, but that’s okay.) Off we go… 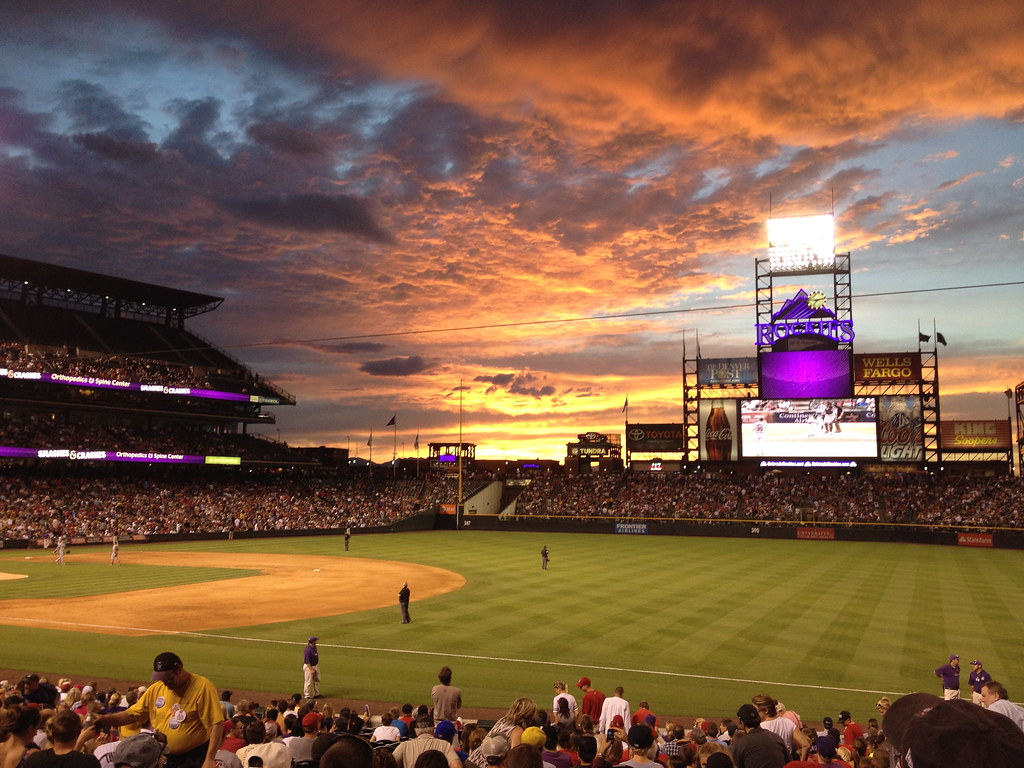 No weekly departments this week but a whole bunch of fun stuff worth your time:

We’ll start with a couple videos from MLB to help get you pumped for the new season. First THIS:

And this next one is right up my alley. Player’s acting out Terrance Mann’s famous “People Will Come” speech?! Pretty cool

The MLB Vine of the year might have come out of Washington yesterday:

College basketball happened this week, too!

Here’s the play of the game from the game of the year, when Wisconsin took down Kentucky.

The fun didn’t carry over for Wisconsin through last night’s championship game, though. I present, “Sad Teletubby”:

These do not look like human hands. Jahill Okafor palming a basketball.

Took this picture of Okafor holding a basketball back in February. Now you understand? pic.twitter.com/wBb0WyzUFM

Just stop it, Steph Curry. I’m kiddin’ he should definitely keep doing awesome stuff like this. (The behind-the-basket view is the best.)

This week’s Sports Illustrated has a nice feature on Garrett Grayson. The story isn’t online yet, but here’s how it looked in the magazine. (Magazines are things made out of paper that people used to subscribe to and purchase at stores. You can read them without any electronics.)

Wow look at this spread inside this week's Sports Illustrated. Garrett Grayson getting some love. @CSUFootball pic.twitter.com/Lny7KkAsNd

More Grayson in Sports Illustrated. Who woulda thunk it 4 years back? pic.twitter.com/qwWuVdytLq

While we’re on the topic of CSU football, here’s the latest “The Grind”. These are still awesome. It’s pretty cool to get an early glimpse into Bobo’s coaching style.

Happy Tuesday everybody. Thanks for reading. If you’re heading out to The Keg on Friday, I hope you have a blast. See ya next week.

Comment on any of this stuff below, or email me at mdhahn1@yahoo.com with post ideas, videos or other media I should kno

Remember this? I do.

Five years ago tonight Scott Hairston hit a 13th-inning, two-run homer to lift the San Diego Padres to an 8-6 lead over the Rockies at Coors Field. I don’t think I can remember a more devastating moment in my career as a sports fan. I was crushed. The Rockies were riding this unbelievable miracle of a winning and streak and were going to come up just short of the playoffs.

In comes Trevor Hoffman, only the greatest closer of all-time. Kaz Matsui doubles. Troy Tulowitzki doubles. Matt Holliday steps up to the plate.

Five years ago tonight. It’s pretty wild to think about the different directions our lives take since that moment. Anyway, that is, without a doubt, the greatest baseball game ever played, so I felt it appropriate to take a look back.

Coming into tonight the Rox had unspeakably won 13 of their past 14 games to somehow force a tiebreaker play-in game against the Padres. Josh Fogg (the Dragonslayer) vs Cy Young-winner Jake Peavy.

It’s easy to forget the deflating grand slam by Adrian Gonzalez in the 3rd inning. Or Todd Helton’s solo homer in the 3rd. Or how dominant Matt Herges and a young Heath Bell were for three innings. Or the Garrett Atkins home run that just sneaked over the fence but was incorrectly ruled a ground rule double. (Note: He would not score in that inning, so if anybody gives you any crap about Holliday not touching home plate, they can just shut it, because we had already been screwed by the umps and that game shouldn’t even have gone into extra innings, even though we’re all glad that it did). It’s easy to forget Holliday badly misplaying a game-tying double in the eighth.

That 13th-inning though, that one is easy to remember.

Up comes Holliday, a homegrown fan-favorite and a lock for the MVP (in my mind at least). Deep fly ball to right. Replays show that Matt thought he hit it out. Not quite. Giles goes back… jumps. This exact moment is one of the most vivid memories for me. From my seat down the third baseline I saw Giles jump and there was this split second of not knowing. Homer? Catch? Off the wall?

Then the ball bounces back toward the infield and Coors Field goes absolutely wild. I’ve never seen a venue like The Keg at that moment. Until Jamey Carroll’s at-bat after Helton was walked.

You know the rest.

Line drive to right. Holiday tags. Dives. Faceplants. Michael Barrett drops the ball. Tim McClelland stands there like an idiot for a few seconds and finally gives a half ass “safe” sign. Rox win. Playoffs. Rocktober. Miracle completed. Bedlam. Did that just happen? That just happened. How did that just happen?

And this is a great clip of Todd (and the ESPN crew) trying to make sense of what just happened (they can’t):

The Rockies are trying to avoid losing 100 losses this week with not much relief in sight. The franchise is essentially a laughing stock. But we should probably all brush that aside tonight and remember, try to relive, the greatest baseball game ever played.

“The one constant through all the years, Ray, has been baseball. America has rolled by like an army of steamrollers. It has been erased like a blackboard, rebuilt, and erased again. But baseball has marked the time. This field. This game. It’s a part of our past, Ray. It reminds us of all that once was good, and that could be again.”

There’s just something about Opening Day. For one day each year, the game of baseball provides us all with reprieve from our daily lives. Opening Day is magic.

The pageantry of Opening Day is is hard to top.

Say what you will about baseball and professional sports, but on Opening Day stories like Ryan Braun’s testosterone level, Joey Votto’s outrageous contract, A-Rod’s purple lips and Ubaldo’s beef with Tulo take a back seat to the crunching of peanut shells, the encouraging tempo of the organ, the pop of the catcher’s mitt and the warmth of sunshine on faces. Opening Day is simple. Opening Day is pure. On Opening Day, if only for a moment, everything makes sense.

The inner-child in all of us comes out on Opening Day. It should at least. We should all remember getting yanked out of school at 11 in the morning in our favorite team’s gear, slapping on a ball glove and taking in the pageantry of Opening Day with wide eyes and full hearts. Across America little hands will be raised with pride and excitement when teachers ask which students won’t be at school on the day of the ballgame.

The grown-up equivalent of this takes place when bosses question fake coughs and roll their eyes at hoarse voices as adults play hookey from the office to imbibe a couple beers and hope that this is their team’s year.

Hope. If there’s one theme of Opening Day it’s hope. Eternal optimism. For one day (in theory anyway) every team is in first place. And not in some kind of lame everyone-gets-a-ribbon-on-field-day sort of way. No, on opening Day everyone is in first place because, on that day, everyone deserves it. This could be their year. Our year. On Opening Day, every fan of every team has a right to dream.

Those dreams are welcomed with pomp and circumstance. Flyovers, fireworks, all-out national anthems and bunting all are on display on Opening Day. (Bunting, the red, white and blue decorative semicircles displayed in stadiums across the country, not the physical act of tapping the ball softly with the bat. You know what I’m talking about).

Put away the hoodies and gloves and boots. Get out your sandals and shades. Baseball is back.

Few things can cause me to write and speak in such romanticized terms and I can’t quite put my finger on what exactly brings it out of me.

There’s just something about Opening Day.

**And here’s the video of the quote used in my intro. If baseball has ever been a part of your life in any capacity, this is automatic goosebumps.

I’m no Roger Ebert, but I’m pretty sure that ginger beard represents our daily lives. Commitments, deadlines, bosses, etc., tugging at us in various directions. James Earl Jones is that voice inside of us saying, “Not today. Not on Opening Day.”

Happy Opening Day to all.