Welcome to the 75th edition of Tuesdays With Mitch, where I have a fairly short post about five hours later than usual. Apparently watching Colorado State beat the hell out of Colorado, then having three more days to party can really take a lot of a guy. (And I didn’t want to wait til Wednesday to “publish”.) Let’s get into it…

Dee Hart ran all over the Colorado Buffaloes. Might he be a top-level talent after all? (Doug Pensinger, Getty Images)

That was a fun one.

Hey, I tried to tell you about Dee Hart. Okay, in fairness I said I wasn’t sure what to expect from the Alabama transfer. But I also said he could be a season-changer. And after one game, that seems to be the case. I did not; however, tell you about JuCo transfer Trey Jarrells. That dude pretty much came out of nowhere. The two combined for 260 yards and three touchdowns against CU.

By now, we all know what happened. CU jumps out to 10-0 and 17-7 leads and things aren’t looking particularly awesome for the Rams. Then the CSU running game just takes over and Colorado State dominates for 24 unanswered points.

I incorrectly predicted that quarterback play would make the difference. Turns out it was the line play. CSU’s offensive line won them this game. A new unit that was assumed to be a weakness dominated a Pac-12 (haha) defense. And– AAAAND!– that all happened after losing Ty Sambrailo in the first quarter. He’s only a possible first-round NFL draft pick and maybe the most important player on the team. And as we all assumed, the Buffs couldn’t run the ball all that well either.

So the offensive and defensive lines of Colorado State decided this year’s showdown. Big ups to them.

Of course, it would behoove all Rams fans to keep this game in perspective. Don’t get me wrong, live it up. Party your ass off. Troll the hell out of CU. But remember, it’s impossible to gauge what a win like this means for the team over the course of the regular season. It’s always wise not to invest too much into a single game, but that is especially true after beating Colorado.

The Buffs could be decent this year. Or they could really, really suck. I’m not going to have fun berating everything about CU again this week, but would anyone in the world be shocked if they went 1-8 in the Pac-12 again?

There is a distinct possibility that CSU just beat one of the worst teams in the country.

We’ll find out a lot more about where CSU stands when they travel to Boise on Saturday Night. The Broncos got their asses kicked by Ole Miss on Thursday, but Ole Miss is hoping to contend for the SEC title and could be a top-10 caliber team.

For all serious Rams fans, a win over Boise State would be much bigger than one over CU. BSU opened as about 10-point favorites, by the way.

The Colorado State student section. Holy crap, guys. This was my ninth consecutive showdown. I spent five or six (actually maybe seven now that I think about it) of them sitting in the student section. albeit, sometimes as a graduate disguised as a student. Anyway, I watched the CSU student section from a distance this year and that was, without a doubt, the most packed and loud and active student section I’ve ever seen for the Rams. They definitely made a serious impact on the outcome. Ram Ruckus, the “Official Student Spirit Group of Colorado State”, announced that the student tickets sold out and it sure looked like it: 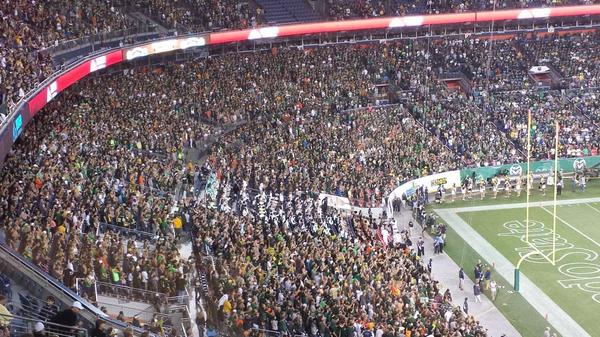 It was that packed on all three levels. They were awesome. Let’s hope they stick around for the rest of the year.

Douche of the week: Michael Hancock

I don’t know if he’s really a douche (probably not), but I want to use this space to talk about the interaction between Denver Mayor Michael Hancock and Jim McElwain, which was pretty hilarious.

That’s coach McElwain grabbing the microphone from Hancock as the mayor is addressing the crowd. McElwain is somewhat forcibly saying, “My name’s coach McElwain.” Hancock called him coach “MacIntyre” (that’s the name of the CU coach, of course) and then stuttered the sound “Mac” a few times before McElwain took over (video here). Later, in a press conference, McElwain made it clear he was still pretty pissed.

“I will say one thing,” he said. “I do understand where we are on the food chain from a relevance standpoint because the mayor doesn’t even know my name.

“The guy needed help, man. Somebody pointed that out, that nobody thinks much of us, even though how many alums do we have in the Denver area? Like the most of any university there is? And yet the mayor doesn’t even know the head ball coach’s name.

“I guess that really shows where we are and where I am as a program. . . Boy, that makes a guy feel good. Guy giving you the trophy and can’t spit your name out. Shows you how much they care about Colorado State, right?”

I think it’s awesome that McElwain is standing up for himself and his program. Not backing down… leaning on the “scrappy underdog” angle… Calling out local politicians who don’t know what they’re talking about… It’s all good with me. I like this guy more and more each week, man.

.@MayorHancock On behalf of Ram Nation, thanks for your message. Really proud of our team – looking forward to next year's game in Denver!

Hey also one more thing how cool is this little image from the CSU marketing folks?

Props to the people behind that one.

Of course, the Broncos season kicks off on Sunday night. There’s no need to add me to the list of people you don’t care about breaking down every game on the schedule. (If they lose in two months does anyone say Oh yeah that one talk show host/blogger/columnist predicted this two months ago!) But overall, you can put me down for 12 or 13 wins.

My gut reaction when looking at the Broncos’ big picture is that they probably won’t go to the Super Bowl again, because going to the Super Bowl is a hard thing to do. But when I look at the AFC, not much scares me. Unless the Broncos seriously regress– and there’s not much reason to think they will– they should be the heavy favorites to win the AFC, and according to Vegas, they are. The Patriots weren’t that close last year. The Colts don’t scare me much outside of Andrew Luck. (I bet Sunday is another Opening Night blowout.) Who else? The Chiefs? Chargers? Mnneehhh.

If the Broncos stay relatively healthy, they should be playing in February. Of course, crazy things happen in the NFL all the time, so this outlook may change.

Off to the (other) weekly departments…

Tweet(s) of the week:

Filed to ESPN: Broncos WR Wes Welker has been suspended four games for use of amphetamines, per sources.

Source: Welker took Molly at the Kentucky Derby. It had been cut with amphetamines. Same situation as Orlando Scandrick.

So… that’s some big news. No time to break it down, but damn!

Check out the wheels on the Auburn ball boy.

And here’s a very happy young man screwing with a news anchor by waving a… Well you can probably figure that out. People messing with news anchors by making idiots out of themselves like this will never get old.

The picture of the week this week is actually just a screen grab of my favorite sign at a sporting event in a long, long time.

A couple links worth sharing:

And finally, uhhh…. I don’t have anything for this space this week so here’s a music video. I’m going to see these gentlemen in a couple days so it seems fitting. I guess. Whatever. (Actually a really awesome performance though.)

Happy Tuesday everybody. Thanks for reading. Enjoy the first great football weekend of the year. See y’all next week.