Welcome to the 55th edition of Tuesdays With Mitch, where we’re mourning the end of the college basketball season but also embracing one of the best times of the year on the sports calendar. Let’s get into it.

Connecticut beat Kentucky to win the national championship last night. It was an impressive performance from the Huskies and a great game that provided a fitting ending to an incredible tournament. Here’s some of the best media stuff from last night:

Twitter thought it was quite interesting that Jerry Jones, Bill Clinton, George W. Bush and Tony Romo were all watching the game together.

These 3 guys are 4-0 in Presidential elections but have only 1 playoff win combined. pic.twitter.com/ixg094QmqK

Then let’s jump to the 2nd half when James Young might have made the play of the tournament. And that’s saying something. 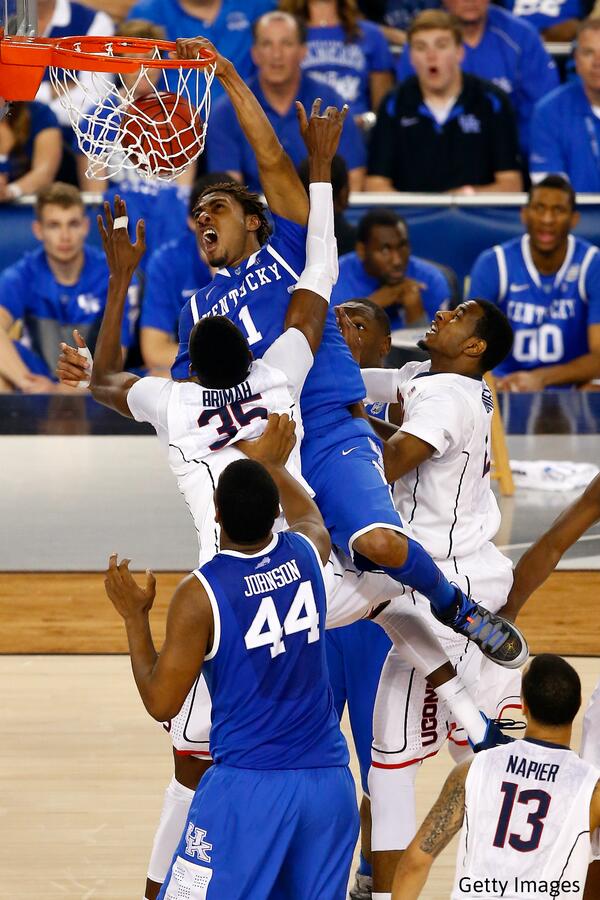 By now we all know that UConn held on for the dramatic win. Their 2nd-year coach Kevin Ollie was a little bit pumped.

This security guard is not enjoying himself as much as the Husky students.

A couple weeks ago I wrote a post that generated some positive feedback from you folks about the tournament’s incredible opening weekend. The next two weekends were also awesome.

Straight goosebumps. See ya in November.

The Rockies’ first week was good and bad. They’re 4-4. I still think they’ll have a good season. That lineup has the potential to do some real damage, especially if Charlie “Chuck_Nazty” Blackmon turns into a reliable leadoff hitter. He was just named the co-NL Player of the Week, due in large part to his historically awesome Home Opener. So that’s a decent start for him. Morneau has been a good fit. CarGo is pretty locked in.

Once the rotation is healthy, they’ll look like a pretty complete team. De La Rosa has been a concern but if he can relax between the ears, his talent should get him back on track. Chatwood comes back this week. Nicasio was dominant at Coors in his only start. Lopez and Belisle are a concern in the bullpen, but a healthy and effective Boone Logan could help with that.

We’ll see where the season goes, but I still think this team has some solid potential.

Congratulations are in order for my good friend Randy Andersen and his new bride Emily ummm… Andersen. He’s a stud. His wedding was awesome (mostly because of the groomsmen), even if it meant I couldn’t go to the home opener or watch the Final Four games on Saturday. This is my favorite of the few pictures I was able to take on Saturday night.

Weddings are the shit.

Whoever made the decision to move the Rocky Mountain Showdown to a Friday night. I hate this move for so many reasons. Having this thing on the Saturday or even Sunday of Labor Day Weekend is pretty much perfect.  Friday night? That’s not perfect.

The reason for the move is the Pac-12– it’s technically a CU home game this year– negotiating with ESPN and Fox for a desired time slot. (TV Dollars! Who knew?) But now people need to figure out a way to get off of work early. Most people can no longer plan their entire day around the game. The tailgating will be hindered. But the attendance is going to take a major hit. The game will now be played at the same time as the opening night of high school football, meaning thousands of Colorado football fans and their families will be preoccupied. For a game that is on life support when it comes to attendance and buzz, this move really hurts.

Tweet(s) of the week:

Ran into @ArianFoster at Pub Fiction last night! So blessed to get a picture with one of my favorite #HoustonTexans!! pic.twitter.com/SpyyyBw09f

Lol I appreciate the love but that's not me. RT @j__baz: Ran into @ArianFoster at Pub Fiction last night! … pic.twitter.com/FoViIxzCmF

This was a funny and somewhat uncomfortable scene.

Personally, I think The Bird is usually a lame and unoriginal gesture, but this one was pretty funny. Also, his blonde friend looks like someone I would never want to hang out with. Also, I actually think I kind of never want to go to Ohio.

This isn’t as cool as catching a ball in your beer and chugging it. But it’s still an awesome way to catch a foul ball. I love those super slo-mo cameras. Who buys popcorn at baseball games, though?

Great shot of some wild action during Saturday’s Avalanche vs. Blues game, which the Avs won 4-0 in an encouraging fashion.

Some notable links from the week in sports media:

And, most everyone surely shared that tingle of anticipation when you walk toward the dark, shadowy gates, down the drab gray hall and then there, suddenly, is the gleaming green of the infield. And you realize there’s no place on the planet you’d rather be, and you wonder about those people who don’t “get” baseball because, at this moment, even if they lived on your block, they’re foreigners for sure.

It was a hell of a run, calf tattoo guy. Nothing to be ashamed of except that awful tattoo. http://t.co/57kk8fKXQI pic.twitter.com/QBNuOocBRK

*I added this article on Monday afternoon. By the time last night’s game had come and gone, the dude was some sort of internet celebrity and I’m sure you’ve heard his story. Anyway, after last night we know he looks like a complete dumbass after all, which is good!

And finally, a little historical context for ya. This happened 40 years ago today.