Welcome to– and Merry Christmas from– the 40th edition of Tuesdays With Mitch, where I just recovered another Washington State fumble.

One of the Colorado sports pictures of the year. An incredible shot from Dan Byers/CSU (@danbyersphoto)

I should probably start with the New Mexico Bowl. That was a fun one.

Things didn’t go so well in the early going.

With under three minutes remaining in the first half, the Rams were down 35-13. Things looked bleak. CSU was able to score 10 straight points to close the half and were getting the ball back to open the third quarter. But the momentum didn’t carry over and the Rams were consistently down between 8 and 15 points throughout the second half.

My buddy and I took a shuttle to the game and I’m glad we did because if we had our own mode of transportation, I might have headed for the exits before Colorado State took over with 4:17 left in the game and a 45-30 score. As a CSU fan, I’ve seen this script play out before. And it never goes in the Rams’ favor.

Here’s a breakdown of what happened next: 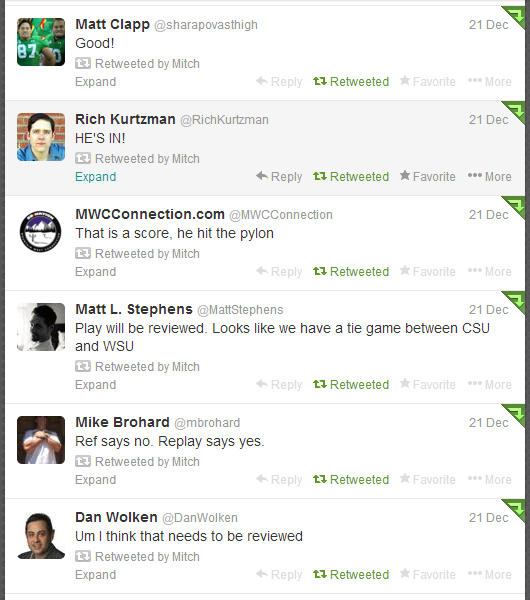 It was just the New Mexico bowl against a Washington State team that isn’t exactly a national championship contender, but this was absolutely one for the ages.

The 2013 New Mexico Bowl victory is destined to go down in Colorado State lore forever. Like rushing the field in Boulder or marching the goal posts down Elizabeth, stories will be told about this one for many years to come.

While we’re on the topic, let’s revisit my prediction from last week. Here’s a screenshot:

Of course, the final score was 48-45 Rams. And it was certainly a wild one. Not too bad; not too bad.

Aside from all that excitement, I did some research and realized that by winning this bowl game Colorado State had accomplished something no other athletic department has done in Colorado.

Going into Saturday, no department from this state had ever won a bowl game and a men’s NCAA tournament game in the same year.

Air Force has made four NCAA tournament appearances but has never won a game. None of their tourney invites came in the same year as one of their 23 bowl appearances.

In 1962 Colorado went to the then 16-team NCAA tournament and won one game. Their football team also played in the Orange Bowl on New Years day of 1962, but lost 25-7 to Louisiana State.

In 1969 Colorado won the Liberty Bowl against Alabama. And the Buffs’ basketball team won a game in the NCAA tournament. Kind of. The Buffs lost in the first round to Colorado State, then beat Texas A&M in the regional 3rd place game. Obviously those types of consolation games no longer exist. So that doesn’t count in this exercise.

The next of these noteworthy seasons didn’t happen until 1990. In March, Colorado State made the NCAA tournament but lost to Alabama. That December the Rams beat Oregon 32-31 in a dramatic ending to the Freedom Bowl.

The Buffs won a tournament game in 1997 behind Chauncey Billups, but that year their football team failed to go to a bowl game for the first time in nine years.

And in 2003 Colorado State lost to Duke in March. On New Year’s Eve of that year they lost to Boston College in the San Francisco Bowl.

Until this year,  those were the only seasons in Colorado history with both a tournament appearance and a bowl game. And this year, CSU was able to win in both, becoming the first program to do so.

2013 was kind to the Colorado State Rams.

And finally, it’s Christmas Eve so none of the weekly installments (there are no douches on Christmas Eve) or funny videos this week. But here’s a little Christmas cheer from David Bowie and Bing Crosby.

As Charles Dickens once said, “Happy, happy Christmas, that can win us back to the delusions of our childhood days, recall to the old man the pleasures of his youth, and transport the traveler back to his own fireside and quiet home.”

I can’t say it any better than that. But from me to you, I hope this Christmas finds you well. I hope you take in the music and the lights and the smells and the food and the drink and the family and the friends. Be kind to one another, if only for a day. I wish you all of God’s peace and goodwill to men.

And as always, thanks to each of you for reading. See ya on New Year’s Eve.