Welcome to the 20th Tuesdays With Mitch, where I can’t think of a clever and timely opening line. Off we go.

I’ve written off The Rockies. Coming out of the All-Star break they had a 10-game homestand against three of the worst teams in the National League. They were 4 games under .500 at the time. By my estimation they had to go 8-2 to get back in the NL West mix. 7-3 would work. 6-4 wouldn’t be enough. They ended up going 5-5 on the stand and went 1-3 against the freaking Marlins.

So that’s that. RIP Rockies’ 2013. Couldn’t quite remain relevant into August.

What’s strange though, is that the Rockies, particularly of late, have gotten really good starting pitching. They just haven’t been able to hit. Too many players have shown regression or been too inconsistent. Fowler, Arenado, LeMahieu and Helton have all been inconsistent. Rutledge, Pacheco and Colvin were just bad.

Anyway, as of today the Rockies are 5 games under .500 and 6.5 out of first place. After their 13-4 start, they’re 38-52, which isn’t very good. For them to make the playoffs, they would have to get really hot and win a whole bunch more games than they lose. I have seen zero evidence that this is possible. And it looks like Dodgers might just run away with the West anyway. I wouldn’t be surprised if they won the division by 10 games.

So now we in Denver are to turn our eyes to the local football squad. I haven’t heard much about them over the course of the summer.

I’m a Denver native and lifer, so I wouldn’t know, but is there another city in America that has the four major professional teams and two major colleges where the sports media focuses so intently on one team?

I remember a day in May when the Rockies were doing well and the Nuggets were in the playoffs when all four sports talk stations were simultaneously talking about the Denver Broncos even though they weren’t scheduled to play a regular season game for about six months.

I find that so strange. I get that the NFL is king and Denver has always been a “Bronco-Town” but sometimes it’s like the media doesn’t realize there are things going on too.

Anyway, the Broncos don’t have a center anymore as their nightmare of an offseason rolls along at full steam.

In April I mentioned that I think it’s awesome when official Twitter accounts show some personality instead of functining as an extended arm of lame and boring PR departments. For example, the Rockies Twitter account tweets out the day’s lineup, official roster moves and links to game wrap-ups on the team’s site. That’s pretty much it. Once in a while they interact with fans with riveting gems like this: 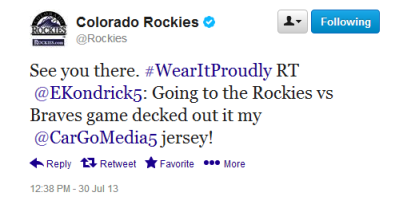 That’s fascinating stuff.  Anyway last night we all were treated to Twitter at its finest. The Rays beat the Red Sox in Boston (with help from a blown call) to take sole possession of first place in the AL East. It was an intense game with a lot on the line. Afterwards, the official Rays Twitter account talked a little junk.

This is about as solid a burn as I can remember seeing from any official account of any kind. A strong jab that you know stung millions of Red Sox fans. Not unlike something a Rays fan might say to a Red Sox fan in person. Thumbs up to whoever is running the Rays account and whoever approved that tweet.

The Red Sox had a response.

OHHHH SHIT! THE TWITTER WAR IS OVER AND THE RAYS HAVE BEEN KNOCKED TF OUT!

Just about 100 percent of the time, the Rays tweet would elicit responses only from idiot fans. Instead the Red Sox took the route of coming back with a haymaker and kick to the nuts all at the same time. This tweet starts like any other boring PR tweet. Then you’re like, Wait… *our* home games? In Tampa? At your stadium? Oh, because there’s always more Red Sox fans at those than Rays fans! I get it! Ouch. Damn. That was cold blooded.

This is about as good as it gets:

This is not how you are supposed to run the bases.

I don’t know why, but I really want one of these.

Can we please get this to Coors Field ASAP?

The best thing you’ll read this summer will be Wright Thompson’s profile of Johnny Manziel. “News” of Johnny Football has been forced down our throats all summer and somebody needed to wrap the whole thing up with a long, comprehensive piece. Wright Thompson is about as good as they come and he nailed it. All the complexities of a fascinating situation regarding his family and the changing nature of fame make for a great read. It’s long, but if you can appreciate good reporting, writing, and storytelling, it’s worth your time.

On a related note, one of the best things about Twitter is watching professionals in the media  interact with one another when interesting work is published. It’s pretty cool to watch, and all the sports media people I follow sure do seem to respect and admire Wright Thompson and his work on this story.

Aside from that one, the best thing you’ll read (with accompanying video) this week is this touching tear-jerker about a really, really good dude who happens to play college football.

I would walk right by this guy too.

And finally, here’s more proof that my sense of humor is on par with most 12-year-olds.

Happy Tuesday everybody. See ya next week.