The Rockies reached the half-way point of their season with a disappointing 10-inning loss to the White Sox on Thursday. They sit 3 games under .500 at 39-42 and are in third place in the underwhelming NL West, 6 1/2 games behind the first-place Giants. Here are my grades for the Rockies with 81 games to play: 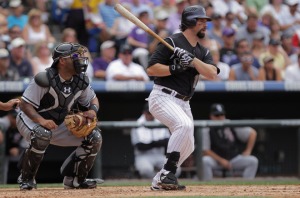 Todd Helton has been one of the few bright spots for the Rockies' offense throughout the year. Photo by Doug Pensinger/Getty Images

The lineup has been Swiss cheese throughout the year. Superstars have struggled. The big hit has been in witness protection. The consistency of Todd Helton and Seth Smith has been a bright spot, but a single player has yet to carry the offense for a stretch of games.

Dexter Fowler failed to improve. Ian Stewart is stuck in the mud in Triple-A, his career taking a huge step (or maybe like five huge steps) backwards.

Troy Tulowitzki and Carlos Gonzalez seem to have their worst days behind them, but the offense still struggles to string together quality at-bats over the course of a game.

Bottom Line: In most offensive categories the Rockies rank in the middle of the pack in the NL (8th in avg., 5th in runs), but the eyeball test says very few pitchers fear this lineup.

Adversity hit the rotation on Day One when Ubaldo Jimenez was lit up on Opening Day. That game set the table for the ace’s first couple months. He hit the DL in April, and in doing so taught me what the hell a “cuticle” is. When he returned his velocity was down, his split-change was pedestrian, his command was flaky, and most notably, his confidence disappeared. 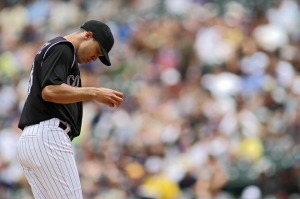 When Ubaldo was at his worst, an absolute bomb was dropped on the rotation. On a cold, rainy afternoon, Jorge De La Rosa, the lefty with the 95 mph fastball and Lincecum-like changeup, tore his labrum. Tommy John. Out for the season, maybe longer.

Still, for the first couple months of the season, the rotation was keeping this team in games. That starts with de facto ace Jhoulys Chacin. Chacin-The-Machine has been just that in the first half, carrying the rotation on his 23-year-old shoulders. It will be interesting to see if he can sustain that burden as the long season wears on.

Jason Hammel has been much better than his 4-7 record suggests. Juan Nicasio has shown flashes of promise, mixed with stretches of cringing. Aaron Cook has returned and been mediocre. I believe Ubaldo has returned to his status as one of the best starters in the game.

Bottom Line: The non-Ubaldo-or-De-La-Rosa rotation overachieved in the early-going. Moving forward, another arm, preferably a lefty (I like Wandy Rodriguez) will be needed to contend for the playoffs.

Huston Street is the best closer in the game at angering fans while earning a save. When “Hate Me Now” starts playing at Coors, it’s time to buckle your seatbelts and hop on board the Huston Street Roller Coaster. (Honestly though who doesn’t like roller coasters?) Street is not a conventional, blow-you-away closer but nobody should complain about converting 23 of 25 save opportunities.

The heart of this bullpen is the Matts. Belilse, Reynolds, and Lindstrom have all been serviceable major league relievers. They’re good; they’re not great.

Lindstrom and his 97 mph heater seem to have wrestled control of the 8th-inning role away from Rafael Betancourt, who is getting hit way harder than the past couple of years.

Felipe Paulino seemed to lose about 12 games in 7 days in early May. He is gone. Fans can be thankful for that.

Bottom Line: The bullpen has been solid. The relievers have proved they can get some big outs, but have been far from dominate.

Expectations were high. Everything seemed to be in place coming into 2011. Things just haven’t come together. Thus far, this team has to be viewed as a serious disappointment. Last year the Giants won the West with a 92-70 record. For the Rockies to reach that mark this year they have to go 53-28 in the second half. That’s 14 (FOURTEEN!) games better than they did in the first half.

Bottom Line: The Rockies aren’t out of it (who is before the All-Star break?) but they have yet again dug themselves into a considerable hole that will be very tough to climb out of.